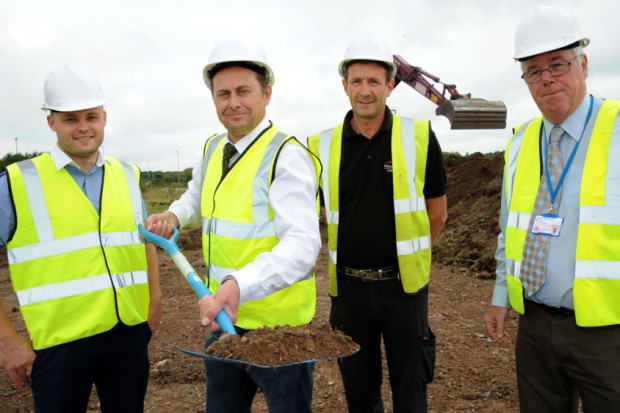 A Hucknall timber merchant is building a brand new £750,000 headquarters as part of ambitious expansion plans after surviving a tough time in the recession.

Wood Lane Timber Merchants have bought a 1.5 acre plot of land on Wigwam Lane and work on the new build began on Monday this week.

The firm, founded by Pat Kelly in 2003, was doing well until the recession of 2008 which badly affected all areas of the economy and hit the building trade hard.

Pat said: “Our turnover dropped by 60 per cent virtually overnight. We lost four of our top ten customers in the first six months – they went bust. It was tough.

“But we got through it and we’re now back to how we were doing before it all kicked off.”

The firm is investing £750,000 in the new site on Butlers Hill Industrial Estate, where it will increase the range of products and services it can offer.

They will leave their current base on Wood Lane, in approximately 26 weeks, to the purpose built depot which is three times bigger than their existing site

Born and bred in Hucknall, he was educated at Holy Cross Primary School in the town and at Christ the King in Arnold. He has lived in Farnsfield for the last eight years.

He founded the firm himself, after working for over 18 years for his dad who ran Whittaker & Co Builders Merchants in Kirkby and Hucknall, followed by work for a joinery contractor in Edwinstowe. He currently employs eight people.

“I always wanted to set up on my own,” he said. “When I was able to lease our present site, I gave up my job and remortgaged my house which, along with a loan from the bank, got me started.”

Councillors Mick Murphy and Ben Bradley, with Vaughandale Construction’s Alan Connor joined him for a sod-cutting ceremony on to mark the start of work on the new location.